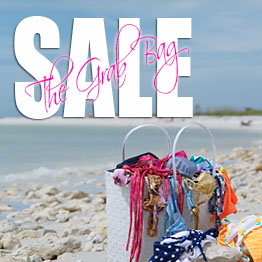 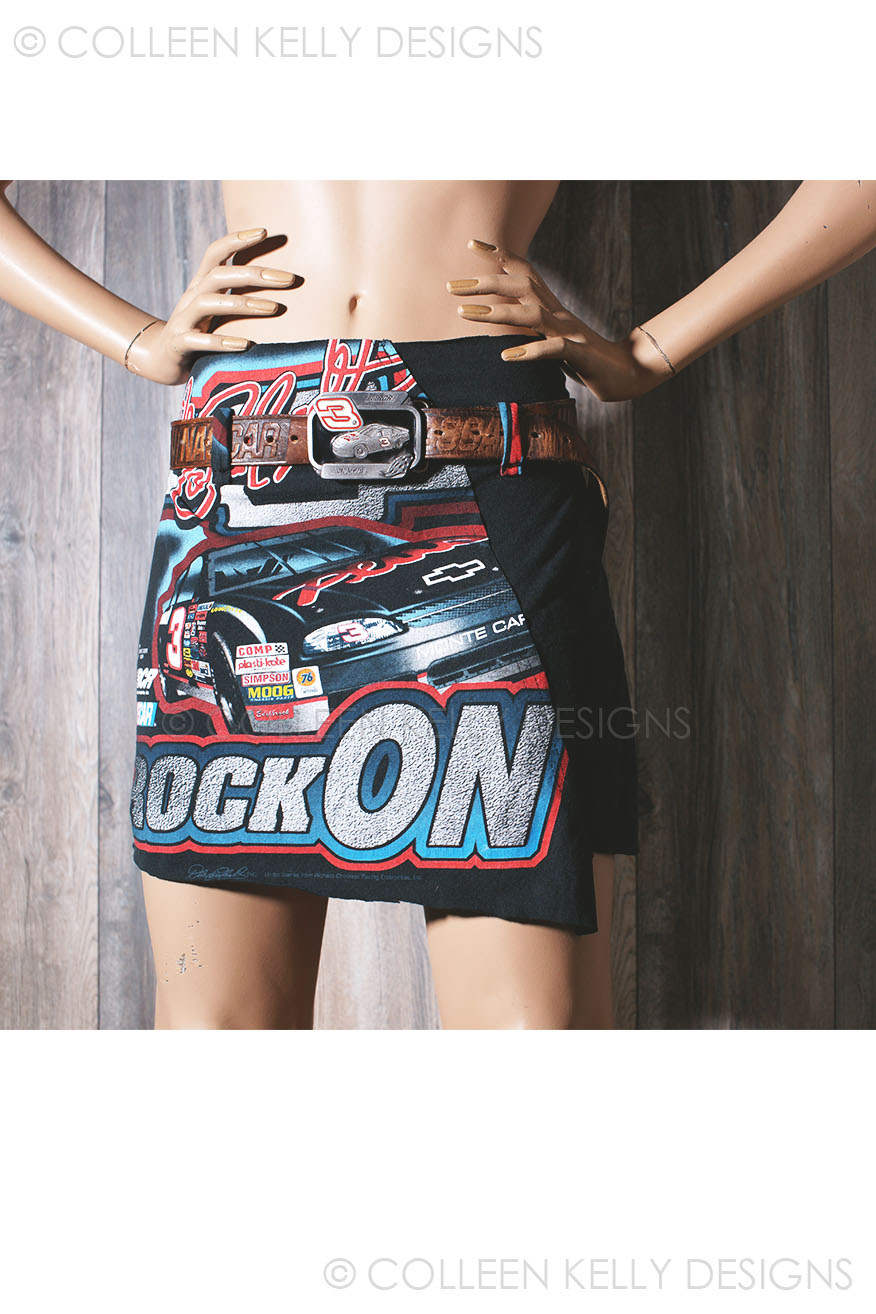 Regarded as one of the most significant drivers in NASCAR history, Dale Earnhardt Sr. began his career in 1975 in the World 600 as part of the Winston Cup. He won numerous cup races and championships, earning him several nicknames like the Intimidator and the Count of Monte Carlo. His instant death after a collision in the final lap of the Daytona 500, in February 2001, has been widely lamented in the industry, and this tee with "Rock on" pays tribute to him. It's "new old stock," meaning it's old, but was never worn, so the graphic is crisp, but the thick paint gently crackling, gives it that true vintage feel. It comes with "NASCAR" stamped belt and NASCAR "Special Edition" #3 commemorative buckle. *Note: the belt also has the nickname "Bullfrog" hand-stamped on the back.
SIZE: LARGE 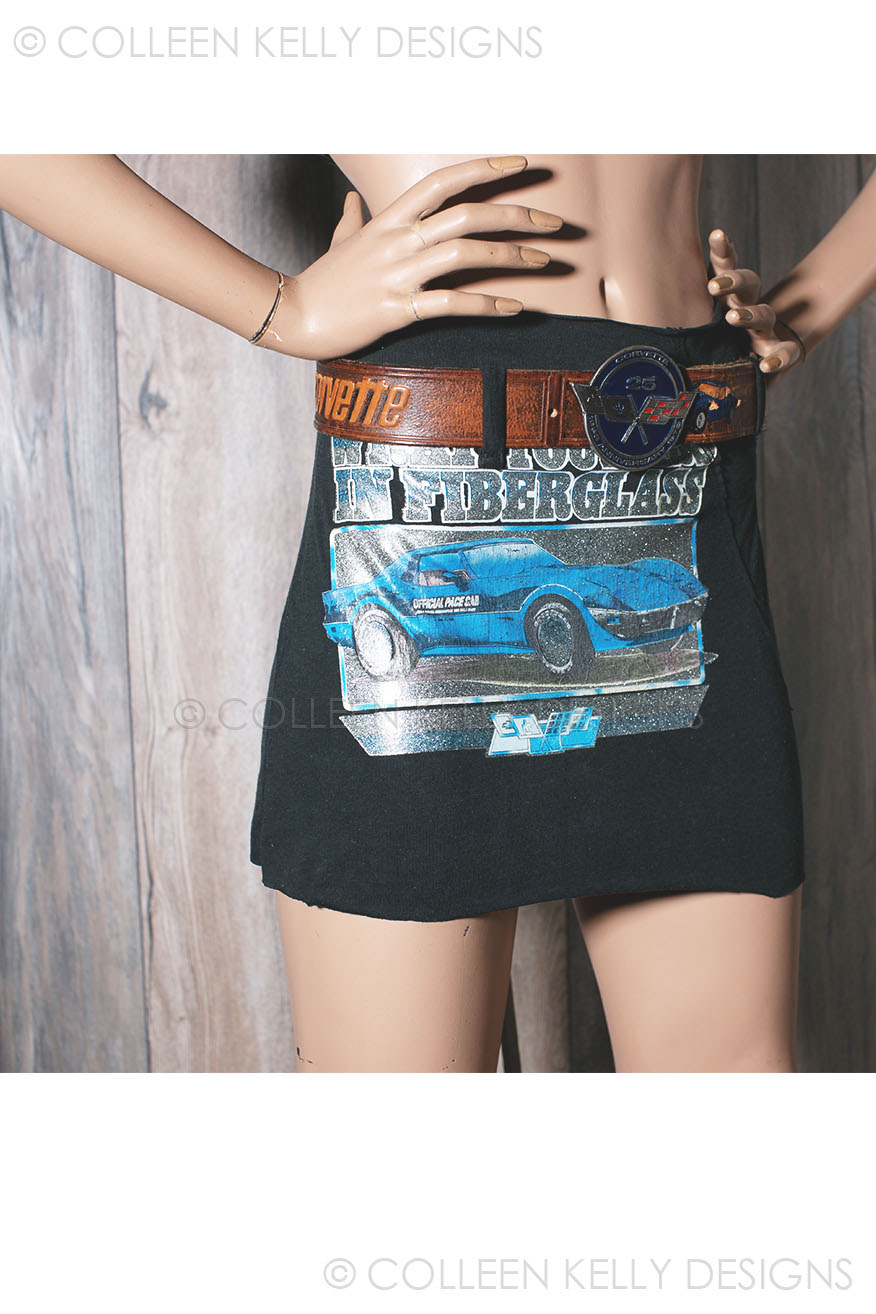 Corvette "Wrap Your Ass In Fiberglass"

Wrap your ass in this glittery homage to the Indianapolis 500 official pace car! This vintage corvette t-skirt features a glittery tee graphic with the "Wrap your Ass in Fiberglass" slogan, something only those Vette fanatics in the 70's could come up with! Almost as cool as the skirt is the hand-painted little blue corvettes on the "Corvette" stamped leather belt, which comes along with a matching, rare 25th Anniversary "1953-1978" Corvette buckle.
SIZE: SMALL 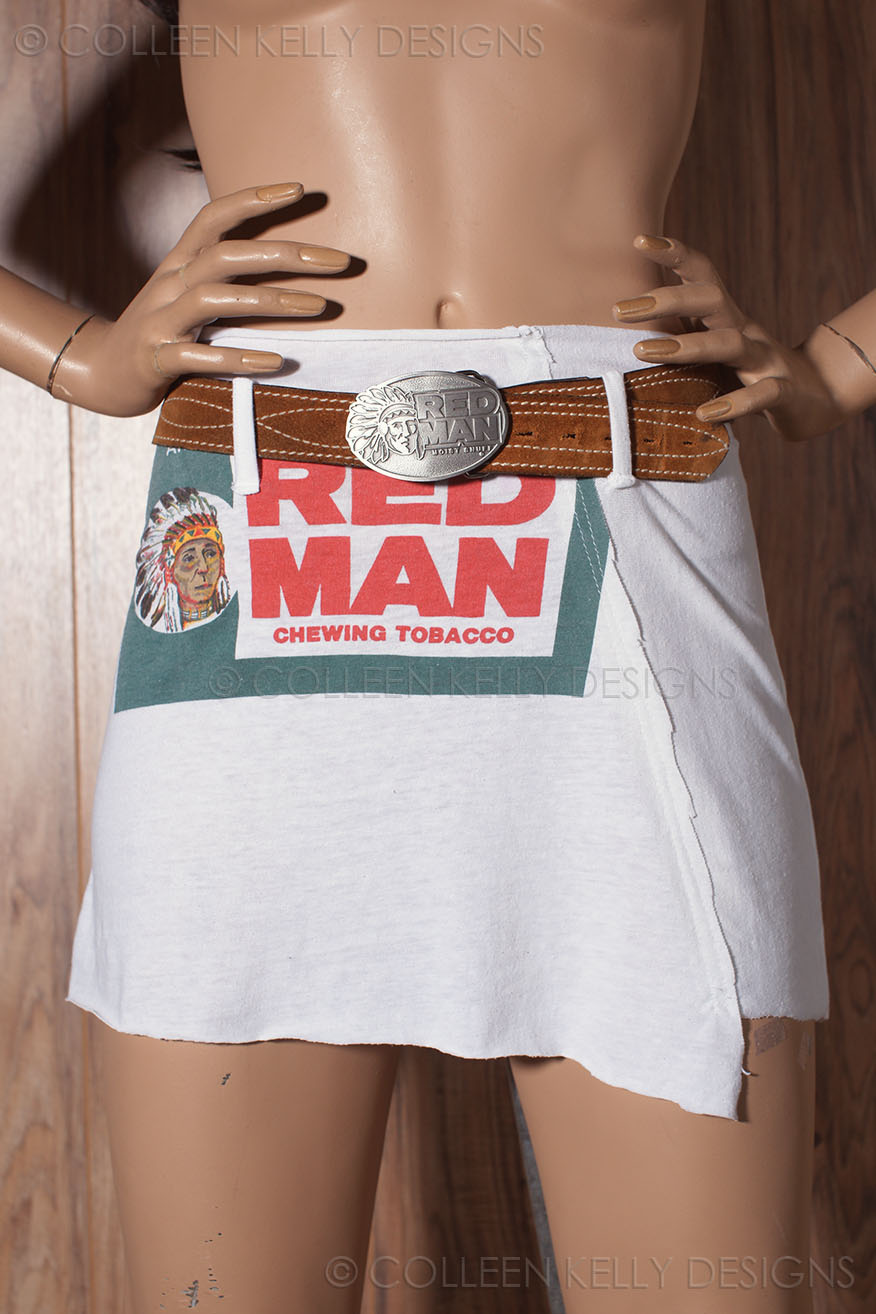 "Red Man" is a leading brand of chewing tobacco in the United States, produced since 1904, it traditionally came as leaf tobacco, in contrast to twist chewing tobacco or the ground tobacco. Known for it's tie-ins with rural and outdoor sports like baseball, fishing, hunting and auto racing, it's been a classic in the U.S. for over a century, and this hard to come by classic logo, which used to be painted on the sides of barns, is super rare. Even rarer is the "Moist Snuff" buckle in front! The look is nicely finished with a soft, saddle-stitched suede leather belt.
SIZE: MEDIUM 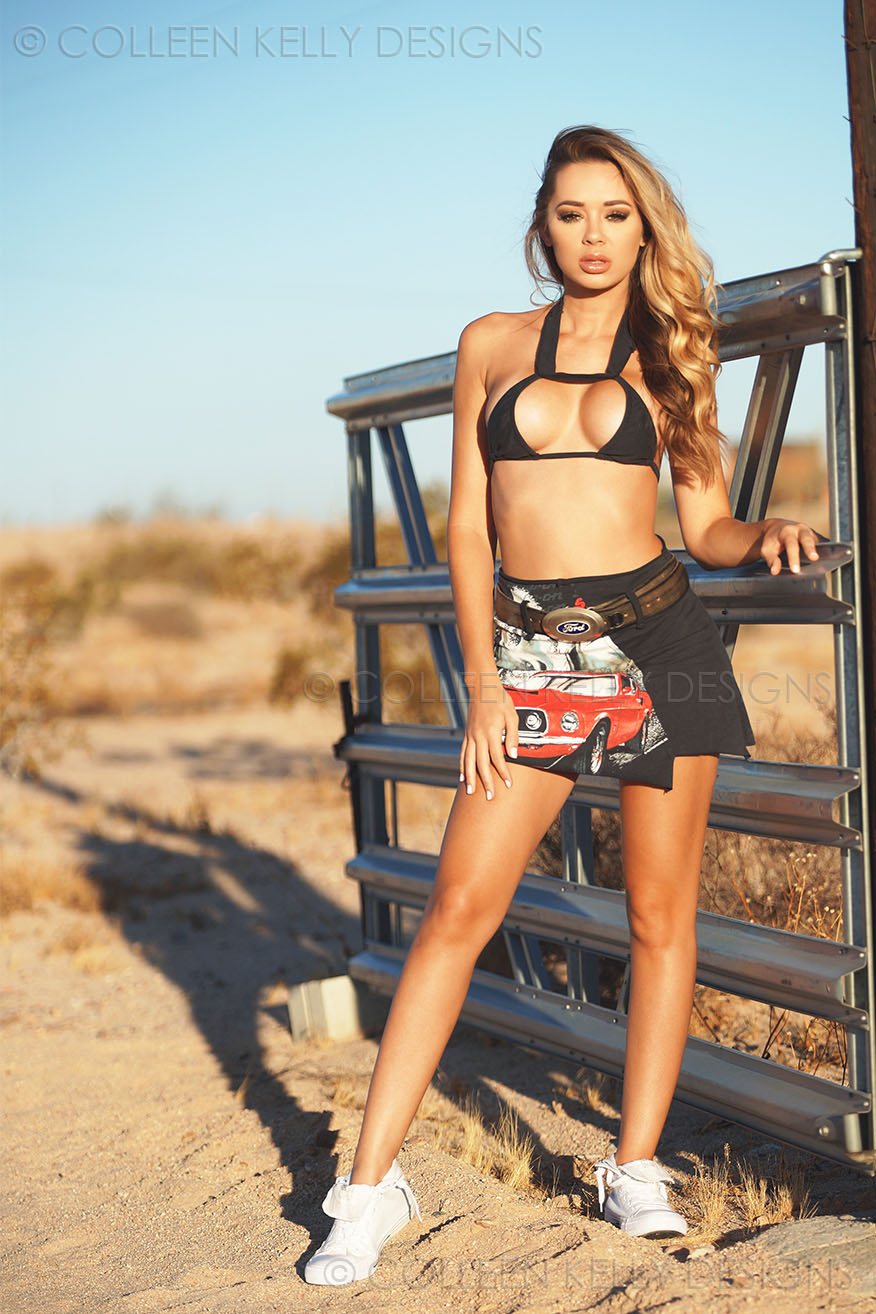 The first Mustangs were manufactured by Ford from March 1964 until 1973 creating a new class of autos known as the pony car... and the "Boss" was a high performance variant only offered in 1969 and 1970. This gorgeous graphic of a roaring herd of white mustang ponies against the brilliant red Mustang 1969 "Boss," is as beautiful as it is cool, with perfectly matching painted belt, stamped "Ford" in back, and iconic Ford logo buckle. *Completing the look, it comes with "Collar tri-top" made from the shirt collar!
SIZE: SMALL 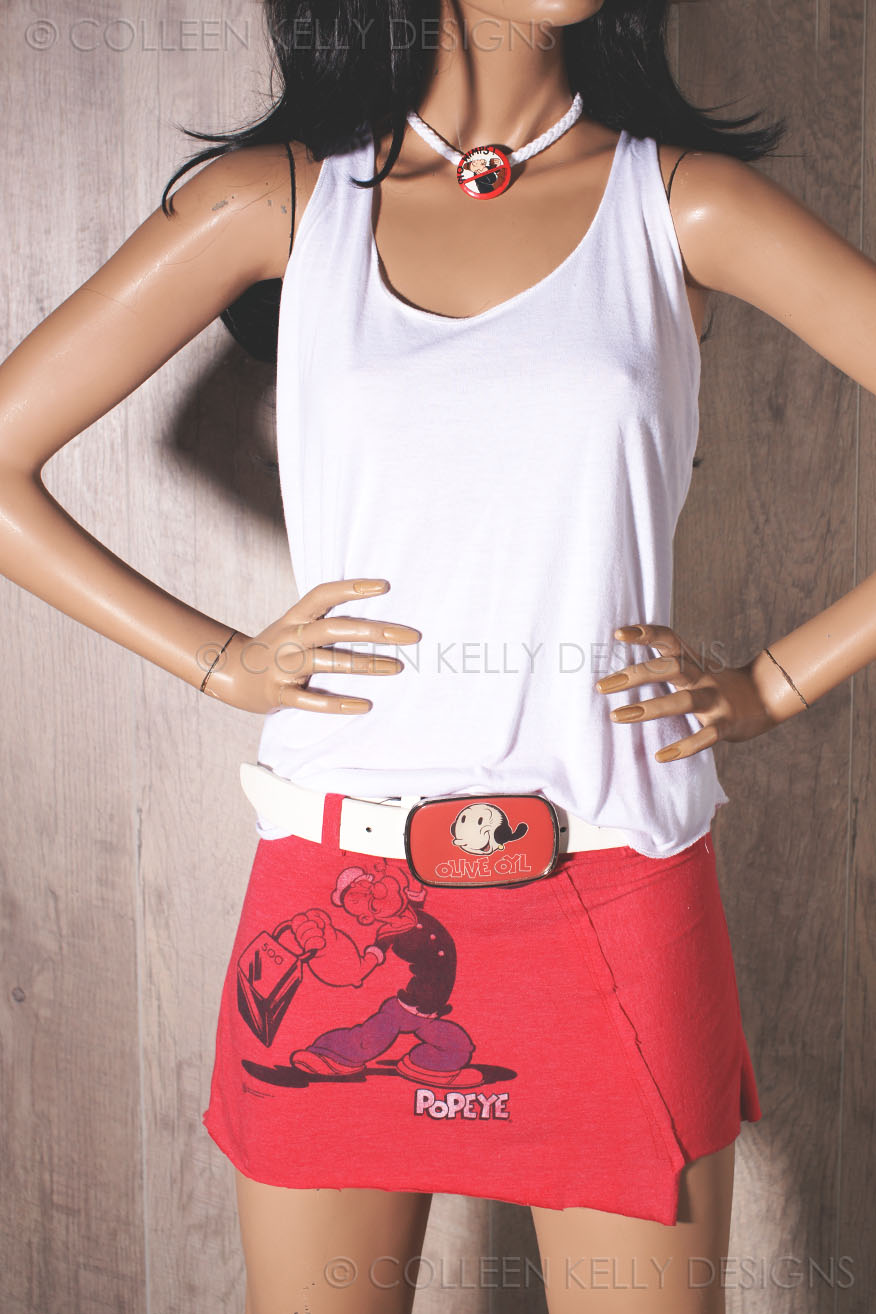 Who doesn't love Popeye showing his exceptional spinach-producing strength? Of course he's always impressing Olive Oyl...just look at her smile! This vintage t-skirt comes with the original white plastic belt (it traveled halfway around the planet to get here). Oh yeah...and not to be left out, Wimpy is always close by eating a burger... In this case, he's on a pin, fashioned into a choker and mounted on a nautical-type rope, with "No Wimps" boldly written across the top...classic!
SIZE: SMALL 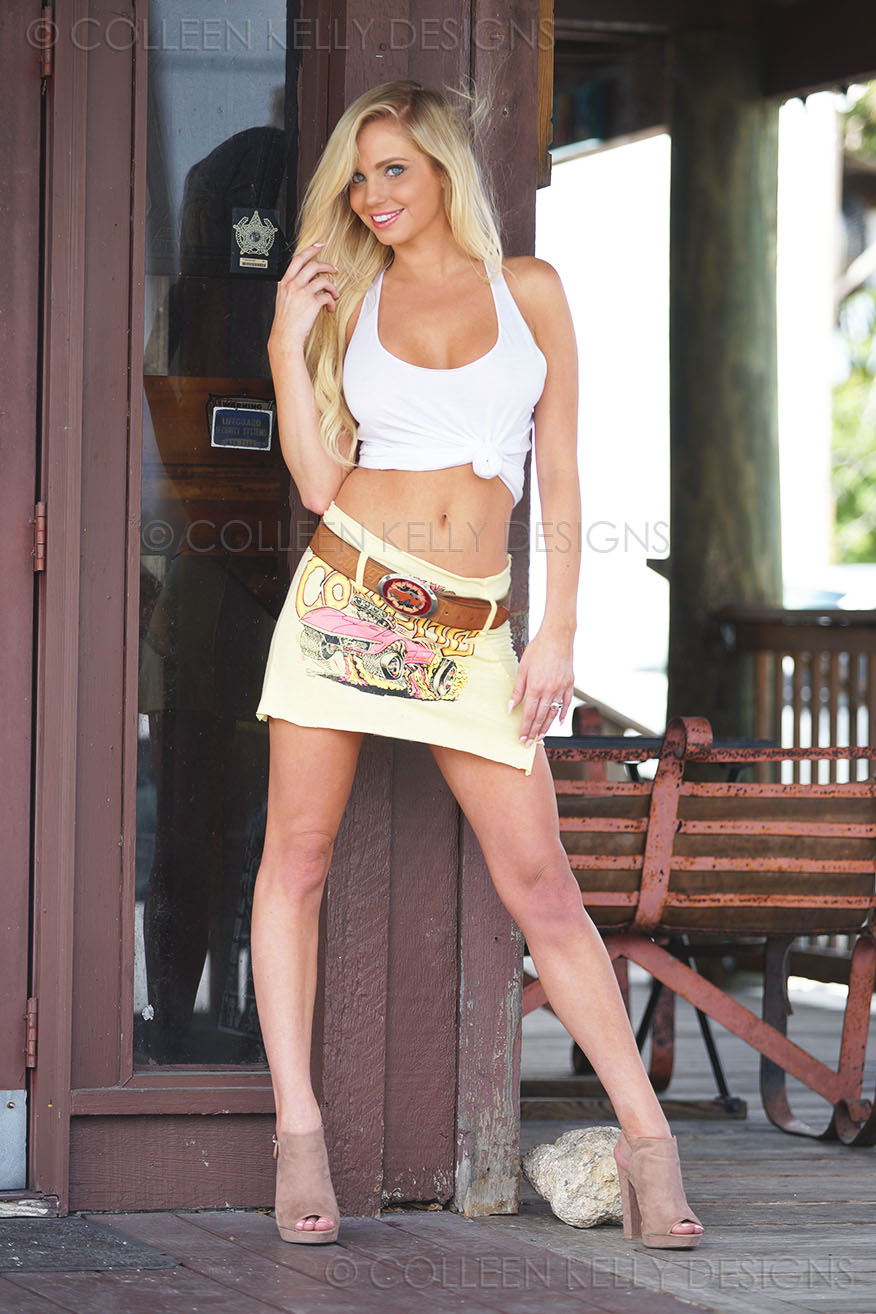 The groovy colors, the artistic graphics, and the 70's slogan on this vintage t-skirt are so mind-blowingly awesome! Corvette lovers, you need this in your life! This is a 1968, brilliant yellow, tissue-thin, vintage t-skirt with a "Roach Chevy Corvette" graphic, crackled in such a perfect way... It also has sparse little paint spots, presumably from some garage 50 years ago, it's worn to perfection! It comes with a super cool 70's tan leather belt that says "Corvette" and has little corvettes embossed on it. One of the best parts is the flashy flames around a little red corvette buckle to complete the look.
SIZE: SMALL 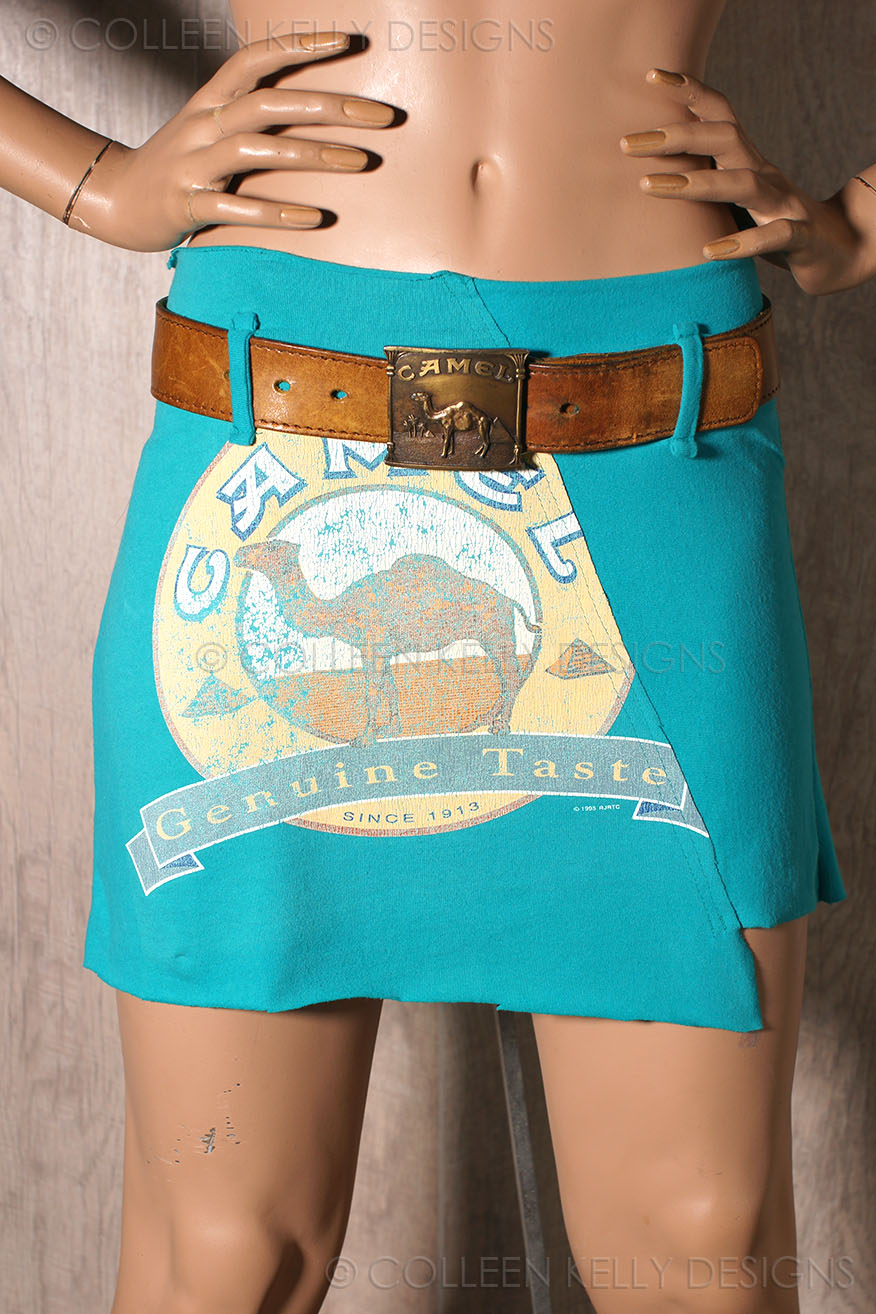 This 90's shade of jade, Classic Camel "Genuine Taste" vintage t-skirt was actually NOS (new old stock) and never worn. It has the luxury of looking new, while maintaining that essential retro vibe! It's got the Classic Camel logo, and it's enhanced with a perfectly matching desert sand shade of leather belt and genuine brass camel cigarettes buckle.
SIZE: MEDIUM 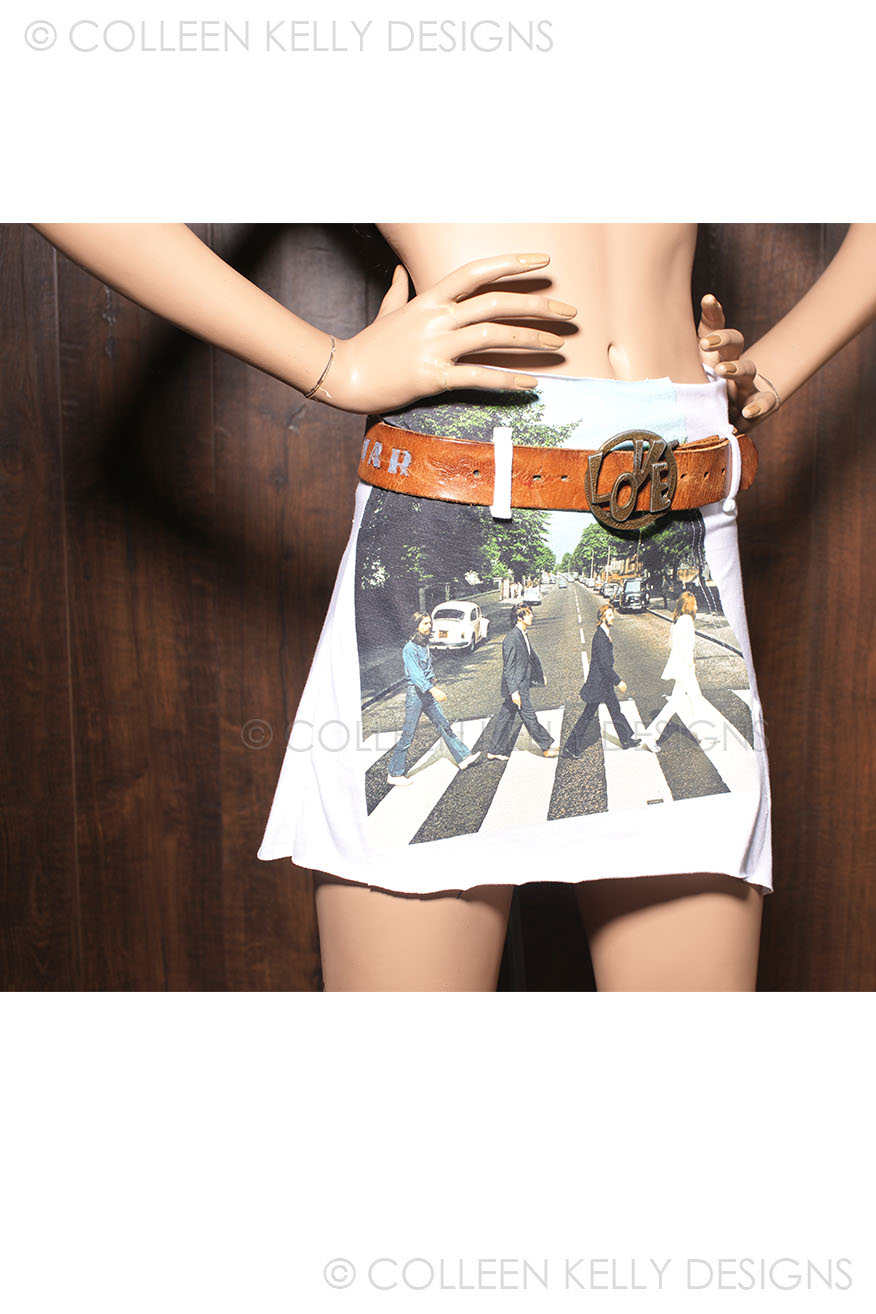 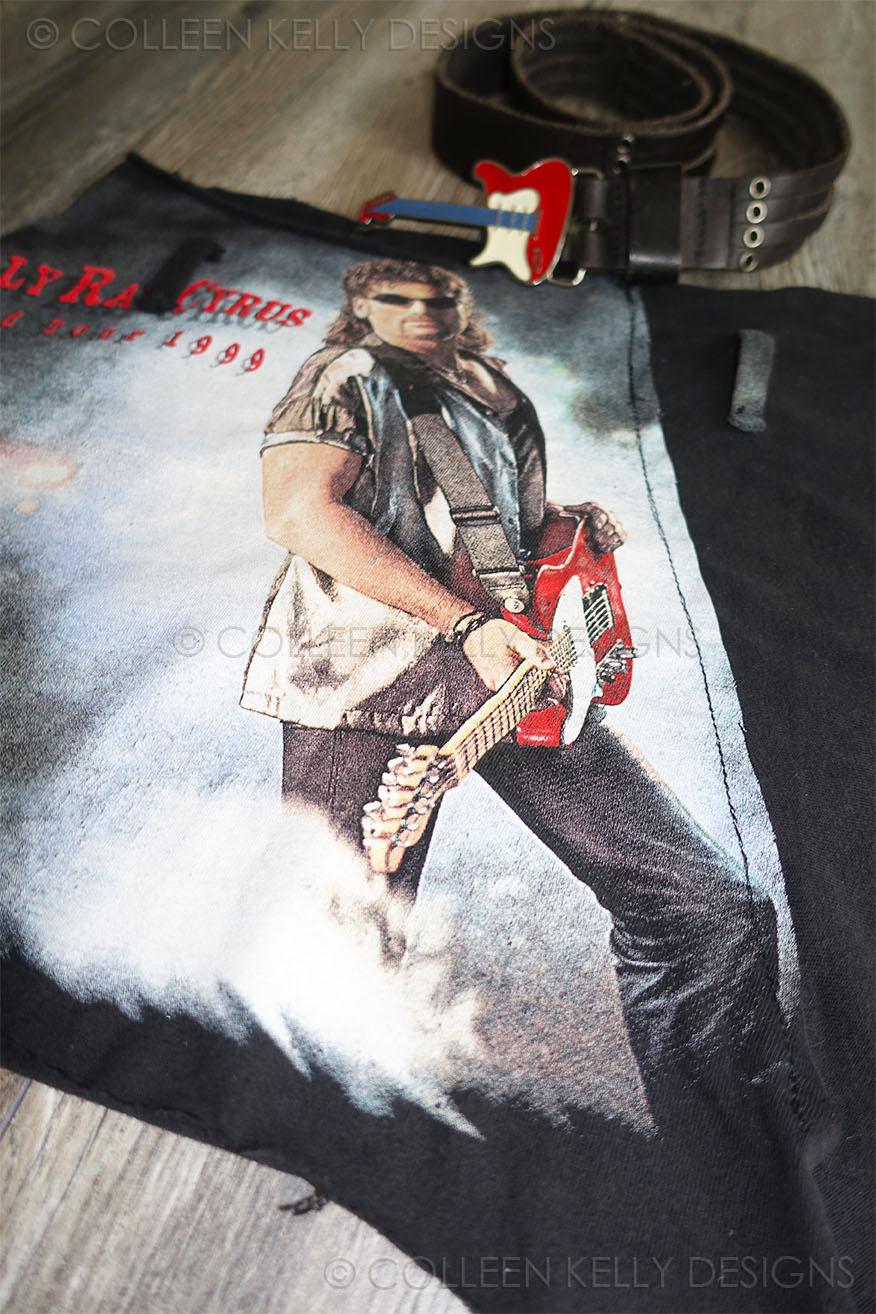 Oh "my achy breakey heart!" This vintage t-skirt shows off Billy Ray with his electric guitar, his classic mullet...and that Ford vintage muscle car on the back though! This 1999 Tour tee has amazing colorful graphics with 90's sliced-leather belt with grommets and perfectly matching enamel electric guitar buckle.
SIZE: MEDIUM/LARGE